In a new Center for Global Development white paper, a look is taken at the scale and scope of emerging donors, many of which are developing economies themselves. On the basis of a survey of the literature, CGD find that estimates of annual aid flows from new donors (so-called non-DAC donors) vary greatly and are somewhere between $11 billion and $41.7 billion, or 8 and 31 percent of global gross Official Development Assistance (ODA).

It is found that new donors are not a monolithic group but instead represent three distinct models of aid delivery, which are described as the OECD Development Assistance Committee (DAC) Model, the Arab Model and the Southern Model.

While there is seen the need to increase transparency and accountability of aid flows across these delivery models, the authors Julie Walz and Vijaya Ramachandran do not see a convergence to the DAC model. Rather, emerging donors may follow different paths, in accordance with their own traditions and standards. 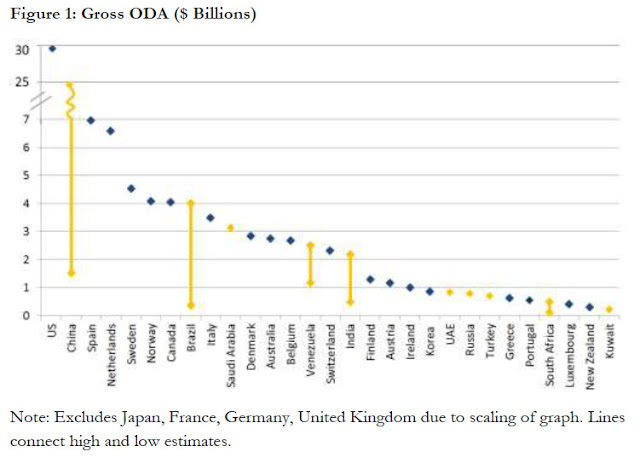 They argue that encouraging aid transparency, especially reporting data on project-level assistance, must be the core focus of the aid community. To engage the non-DAC donors, the forum for international aid coordination might need to be moved away from the OECD-DAC platform; DAC could instead serve as one donor caucus within a larger international system of aid reporting. 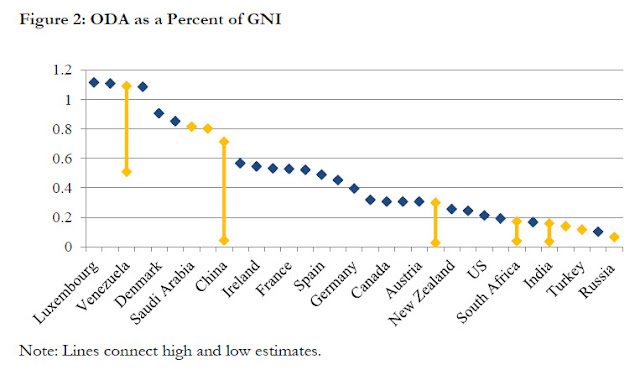 Their candidates for this independent body include the U.N. Development Cooperation Forum and the International Aid Transparency Initiative.

An article in the latest issue of Fortune magazine focuses on MCC and its innovative approach to development, stating, "Early results suggest the model is working," and "the agency certainly gives the taxpayer real bang for the buck."

While in Busan, the U.S. Government delegation, led by Secretary of State Hillary Rodham Clinton, will be working with other donors and recipient countries to redefine how everyone thinks about results. A goal will be to shift the focus from measuring results by dollars spent to demonstrable outcomes and actual impact, an approach that agencies such as MCC has continued to develop and implement since its creation nearly eight years ago.

MCC has published a variety of white papers and facts sheets on Aid effectiveness. Visit the link here to access the resources.
Posted by KNO at 7:03 AM No comments:

Challenges for the Millennium Challenge Corp

Lorenzo Piccolo writing in a Devex article provides a short history and an overview to the upcoming opportunities and challenges for the Millennium Challenge Corporation. A few extracts are below. It is a very good summary well-sourced.
Read the full article here.

The MCC was founded on the premise that policies do matter in development. Since the 1980s, portions of U.S. development assistance have been allocated on the basis of policy performance. President Bush’s initiative broke new ground because all MCC grants, known as compacts, would only be within reach of a select group of poor countries that had taken some command of its own policies that would induce its own development.

Here’s how the MCC works: to qualify for large, five-year, untied grants for poverty reduction and economic growth, poor countries must perform better than their peers on 17 indicators that measure good governance, economic openness, and social sector investment.

Once a country qualifies and is selected by the MCC, it must identify its funding priorities and develop a program proposal in consultation with civil society. Before implementation, a compact is signed between the MCC and the recipient country that records mutually agreed objectives and benchmarks. The MCC provides guidance and oversight throughout the process. Since its establishment in 2004, the MCC has signed compacts with 23 countries totaling $8.2 billion, well below President Bush’s $5 billion annual commitment.

Yet while funding for the MCC has fallen far short of expectations, there is broad agreement in the development community that the agency has nonetheless been a worthwhile experiment and effective aid delivery model. From the Philippines to Lesotho, in what has been called the “MCC effect,” an assortment of countries have enacted meaningful reform in order to join the ranks of compact countries.

And beyond creating incentives for policies widely believed to support development, the MCC is also producing results on the ground. According to MCC CEO Daniel W. Yohannes, in testimony before Congress, MCC programs have trained over 150,000 farmers and supported construction of more than 890 kilometers of road.

Read the full article here.
Posted by KNO at 12:28 PM No comments:

An extract:
It's couched in 60 pages of near-incomprehensible economic-speak, but a radical World Bank plan (link here) to set up a new way to lend money to developing countries is being called a potential disaster for indigenous peoples, the environment and human rights. The proposal, called A New Instrument to Advance Development Effectiveness: Programme-for-Results Lending (P4R), would lend money according to results achieved by projects.

The proposal was published in February, and phase II consultations ended recently. Board approval is expected by the end of the year. Some of the NGOs that keep an eye on the bank's activities – International Rivers, Friends of the Earth US and Bank Information Centre – say the clear intention is to allow countries to sidestep dozens of tough, and expensive, social and environmental safeguards which recipients of World Bank loans must normally meet. Read full piece here. 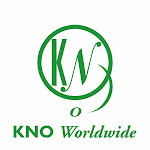